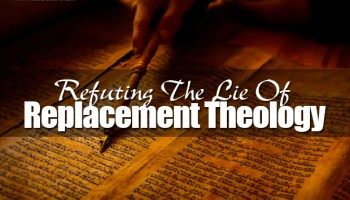 Is Israel now spiritual entity? Have those who Believe in the Messiah replaced  Israel? Is Israel no more a HOLY NATION and people SET APART through which the rest of Mankind will be reached and brought into the knowledge of the TRUTH? Will the MESSIAH not rule from Zion(Israel)?

Lets Explore and find out the Truth.

Recently, I became more keenly aware of the spiritual conflict that rages over Israel. This conflict settles on the battleground of Replacement theology. While we reject this theological concept, it is worth noting that it is a ‘new’ that has strengthened itself over many centuries within churches of all traditions. It is therefore not easily removed and yet we are called to do so with the sword of the Spirit, the Word of YAHUAH .

To some degree, Replacement theology is so deceptive because it rests on half-truths. For instance, the Church is the “Israel of God” but not in a replacement sense (Galatians 6:14-16).

In essence, Replacement theology removes from Israel a national destiny in the land of Canaan because of her rejection of YAHUSHA’s Messianic credentials. All the biblical statements of Israel enjoying future blessings in the land of Canaan are said to be descriptions of the spiritual blessings that now accrue to the Church. The expectation of a physical kingdom has been spiritualized and taken from Israel and given to the Gentiles (Matthew 21:43), even though YAHUSHA the MESSIAH never denied that the physical kingdom would be restored to Israel (Acts 1:6-7).

That this way of expounding Scripture completely violates the principles of biblical exposition is of little importance to them. We should interpret Scripture by the nature of the text. If it is literal, then we should interpret it literally, but if it is spiritual or figurative, then we should respond accordingly. For instance, YAHUSHA said, “I am the door!” Does this mean He actually is a door? Of course not! The context is clearly figurative and needs to be interpreted as such.

We are therefore not committed to any singular form of biblical exposition – literal or figurative – but rather to the context. This will determine our style of exposition and therefore we uphold the integrity of Scripture and its authority.

The Essentials of Replacement Theology

Replacement theology rests chiefly on the idea that the whole or part of the Abrahamic Covenant has been abolished, for it is this Covenant that promises to Israel eternal ownership of the land of Canaan (Genesis 17:7-8).

Once this ‘promise’ has been removed, the present-day restoration of Israel means nothing and her only hope is in the Church. Now it must be made clear that we believe that only in YAHUSHA the MESSIAH can there be salvation for Israel and Gentiles alike (Romans 1:16-17). However, we do not believe that the promise of YAHUAH in the Abrahamic Covenant bequeathing the land of Canaan to Israel has been removed, and therefore Israel’s when restored  to the land of Canaan will be the  fulfillment of that promise and will constitute a milestone on her ‘way home’ to her Messiah (Ezekiel 36:24-28).

The Replacement camp is divided into two opinions concerning the Abrahamic Covenant:

This camp sees the Covenant with Abraham as being entirely abolished. However they have serious difficulties because Paul writing to the Galatians states that YAHUSHA died in order to bring to our lives the blessings of the Abrahamic Covenant and if we belong to YAHUSHA, we are Abraham’s children according to the promise (Galatians 3:13-14, 29).

If the Covenant has been abolished, then what Paul says is wrong! Moreover the writer of the Book of Hebrews states that we can trust YAHUAH to be faithful to the New Covenant because He has always been faithful to the Abrahamic Covenant (Hebrews 6:13-20). This constitutes a serious problem for the Abolitionists because, if the Abrahamic Covenant has been abolished, then YAHUAH is a liar and indeed is not faithful, though the writer of Hebrews affirms that He is not a liar and is always faithful!

This theory states that the Abrahamic Covenant has indeed not been abolished but it has been reconstructed. That is, the part that promises land to Israel now means spiritual promises and not literal ones. The problem with this theory is:

(a) It is a total presupposition and the Scriptures nowhere affirm it. That all nations would be blessed in the MESSIAH was actually the intention of the Abrahamic Covenant from the very beginning, but this does not remove from the Israel people a national destiny in the Holy Land.

Reconstructionists lay emphasis on Paul’s teaching in the Book of Galatians concerning YAHUAH’s promise in Abraham being made not to his “seed”, plural, that is the people of Israel, but to his “seed” singular, meaning YAHUSHA THE MESSIAH (Galatians 3:15-18). Therefore they conclude that since the “seed” THE MESSIAH has come, the promise to the “seed” of Abraham as in plural – meaning the people – has been removed! They have forfeited the land!

The truth is that Paul also uses the term “Abraham’s seed” in the plural in the New Testament (Romans 9:6-7). In other words both interpretations of the term “seed” are true! Abraham’s seed is singular and plural. The blessing YAHUAH promised in Abraham is only in YAHUSHA THE MESSIAH  because He died for the whole world, but the mediation or means by which this blessed “seed” comes into the world is through the “seed” plural – the people of Israel. The one truth does not contradict the other. Both truths are in fact interdependent (Romans 9:1-5), hence the extensive genealogy of YAHUSHA given in the Gospels of Matthew and Luke (Matthew 1:1-17; Luke 3:23-38).

The Bible nowhere states that the promise of YAHUAH in Abraham concerning Israel’s everlasting possession of the Land of Canaan are removed. In fact, everywhere it affirms the opposite! That is, that a day is coming when Israel will be restored to the land and to her Messiah (Ezekiel 36:24-32). This passage from Ezekiel teaches the very opposite of Replacement theology, in that Israel’s rebellion and sin has not led to land forfeiture but to judgment and correction, yet in the end YAHUAH will, for His Name’s sake, restore Israel to her ancient land and to Himself! He does this in spite of her history of rebellion and sin.

(b) The Scriptures refute it. YAHUSHA came to confirm the promises to the Fathers, not to reconstruct them (Romans 15:7-9). Confirm means CONFIRM! He takes away nothing but reinforces every promise that YAHUAH made to the fathers (Acts 3:22-26). Peter affirms that there must be a time of “restoration of all things” before the Messiah returns. This “restoration of all things” is spoken about by all the prophets – meaning a final regathering to the Land of Canaan and repentance leading to salvation in the Messiah YAHUSHA (Amos 9:11-15; Jeremiah 36:26-28).

Israel has always been YAHUAH’s vehicle of world redemption (Romans 9:1-5). In a way, she is YAHUAH’s microphone, the means by which He speaks to a lost world. Moreover, she has birthed YAHUAH’s covenants into the world and will soon come back to her ancient homeland, by the promise of the Abrahamic Covenant, to birth the final great covenant of history, the Davidic Covenant(That the seed of David will seat forever in his throne). Herein lies the ultimate purpose of Israel coming restoration. YAHUSHA will return to Zion as the root and offspring of David (Revelation 22:1-6; Psalm 2:1-12; Psalm 72:5-11).

Replacement theology is thus an instrument of the powers of darkness to frustrate the purpose of YAHUAH, by replacing Israel with the Church instead of calling Israel the church(The SET APART PEOPLE) and letting all people to come and be grafted into Israel through the MESSIAH YAHUSHA who is the ETERNAL KING in the everlasting kingdom. We reject it and stand fully on the promises of YAHUAH concerning Israel. (Jeremiah 31:31).

Israel the original branch was broken off(cast out) because of unbelief in the MESSIAH and the gentiles who are wild branch grafted into the MESSIAH. But Israel was not cast out permanently. It was done to fulfill the will of YAHUAH so that the gentiles will be brought in. But Israel is now being grafted back and this is easier because she is original branch being of the same with the MESSIAH. Paul described it perfectly in Romans Chapter 11.

Finally we want to make it clear that Israel has not been restored to the land of Canaan and that those there right now are imposters planted by Europe and America. They are Ashkenazi from the Kharzrian empire(Turkey & Russia).
Revelations 2:9 and Revelations 3:9.

DO YOU NEED BAPTISM TO BE SAVED?