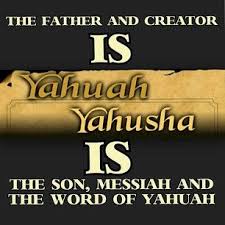 Did you know that the name “Jesus” is less than 400 years old? Where did this name come from, and what was the original name of our Messiah?

In the Bible, names have significant meanings. For example, the name Abram means “exalted father”, but the name Abraham means “father of a multitude”. This is why YAH changed his name from Abram to Abraham saying,

“No longer shall your name be called Abram, but your name shall be Abraham; for I have made you a father of many nations.” Genesis 17:5

Likewise, the name of our Messiah has significant meaning. When the Angel of YAHUAH spoke to Yoceph about his son, he told Yoceph what to name the child, saying,

“And she will bring forth a Son, and you shall call His name YAHUSHA, for He will save His people from their sins.” Matthew 1:21

This is significant because the name “YAHUSHA” means “ YAHUAH cries out to Save or YAH has Saved”. The Angel was basically saying, “call Him YAH is Salvation because He will save His people from their sins.”

So, where did the name “Jesus” come from?

The spelling of the name “Jesus” has been in use for less than 400 years. This can easily be seen in the fact that the 1611 King James Version of the Bible still spelled His name “Iesous”, not “Jesus”. The name Iesous was used in Greek, Latin, and English until the 17th century, when the letter “J” was introduced as a replacement for the letter “I” when used as a consonant. However, it was still pronounced “Yea-soos” for many years before it eventually took on the “g” sound that we know today in the word “Jesus”. This means the pronunciation of the name “Jesus” is a very recent development in the English language.

Some people also claim that His name was changed to Jesus to hide the fact that He was a Jew since Jesus is based on a Greek name rather than a Hebrew name. While it is possible that there might be some truth to this claim, it is pretty far fetched to think that it was some grand conspiracy to hide the Jewishness of the messiah, since the Bible clearly tells us that the messiah was Jewish.

“For it is evident that our ADONAI arose from Yahudah, of which tribe Mosheh(Moses) spoke nothing concerning priesthood.” Hebrews 7:14

Likewise, the Gospels contain some pretty extensive genealogies that trace the Jewish lineage of the messiah back to a number of Old Testament Jewish people including Abraham, Isaac, Jacob, and David.

Unfortunately, despite these facts, some people remain unaware of the fact that Messiah was Jewish.

Is it wrong to call Him “Jesus”?

In my own opinion, it is wrong because it is not his name. I prefer to call Him by His one and only name, which is a Hebrew name: YAHUSHA, because it has such powerful meaning and significance. He is salvation and His name is Salvation! He has no other name except YAHUSHA. We can use millions of titles for Him but that does not and can not stand for or substitute His Sacred name.

I want anyone to know that it does not bother me if you use the name “Jesus”. But I will not call Him what Greek, Roman or English people chose to call Him. I will use the name given to Him by His Father which is above every other name.

I hope this teaching has helped to clear up some of the confusion about the name Jesus, and I hope it has given you a better understanding about how His name was messed up; from YAHUSHA to Jesus.