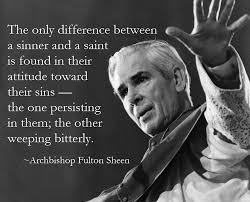 Lesson from the life of Augustine (Augustine of Hippo)

At about the age of 19, Augustine began an affair with a young woman in Carthage. Though his mother wanted him to marry a person of his class, the woman remained his lover for over fifteen years and gave birth to his son Adeodatus, who was viewed as extremely intelligent by his contemporaries.

In 385, Augustine ended his relationship with his lover in order to prepare himself to marry a ten-year-old heiress. (He had to wait for two years because the legal age of marriage was twelve. By the time he was able to marry her, however, he instead decided to become a celibate priest).

The famous prayer of Augustine before he changed was;
“YAH grant me chastity and continence (sexual Abstinence) but not yet”.

YAH uses the weak to show His power. Do not give up or lose hope. Just mend your ways and start to seek Him in Truth, you will find Him. Just like the prodigal son made a move, pray to YAHUAH for the grace to make your move and the rest will be history.

Let the story of this famous man who repented and became a famous holy man, give us the courage and assurance that the GRACE of YAH is always available to those who search for Him sincerely. Let the story not give us the idea to waste YAH’s GRACE and remain in sin hoping that He will always forgive. Those who fear YAH do not put Him to test.

We must always have at the back of our minds that true repentance from sin is the greatest grace and mercy of YAH. Augustine received this grace and changed from life of immorality to a life of righteousness. No matter the sin holding you down, do not give up, keep praying for YAH’s grace to overcome it and you will be victorious in due course.

Every holy man or woman had a past, and every sinner has a future. It is not over until is over. The fact you are down today doesn’t mean you cannot rise and become the holiest man on earth. Do not accept defeat and remain in Sin, rather rise and call upon the name of YAHUSHA given to us by which salvation comes and you will be free from sin and enjoy righteousness through His grace and mercy.

YAHUAH bless us and give us the grace to turn from sinners to saints.

Every saint had a past!
Every Sinner has a future!!

Nothing will separate us from the Love of YAH.