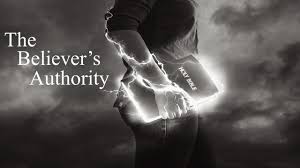 “And ELOHIYM blessed them, and ELOHIYM said unto them, Be fruitful, and multiply, and replenish the earth, and subdue it: and have dominion over the fish of the sea, and over the fowl of the air, and over every living thing that moves upon the earth”. Bere’shiyth(Genesis) 1:28

In the first words recorded in the Holy Book, YAHUAH gave the human race authority, He commanded them to “subdue” the earth. The Hebrew word suggests being bold and aggressive. Conquering and overcoming.

Introducing the concept of authority and dominion, YAH gave the man and woman the opportunity to rule His creation. To shape, explore, and develop but also to dominate.

This authority is a powerful concept, filled with potential and danger. Throughout history, some have abused this authority, taking advantage of others. But this authority also is an important principle in the Kingdom of YAHUAH.

We see this authority in action throughout YAHUSHA’s ministry. Observers were amazed “for He was teaching them as one having authority, and not as the scribes” MARQUS (Mark 1:22). He demonstrated authority over demons and diseases MARQUS (Mark 3:15).

Showing the importance of authority, YAHUSHA  “marveled” when a centurion described how power flowed from YAHUSHA when He just spoke a word. Why?

Because he himself was “a man placed under authority.” He realised YAHUSHA’S authority in the spiritual world. YAHUSHA described how this was an example of “great faith,” and why authority is such a powerful concept LUQAS (Luke)7:1-9.

YAHUSHA gave His disciples authority, sending them out with “authority over the unclean spirits” MARQUS (Mark) 6:7.

Before His acension, He declared that “all authority has been given to Him in heaven and on earth” Mattithyahu(Matthew) 28:18.

There are several aspects of this authority for believers. First, we must believe we have authority, grasp the implications, and be ready to put this authority into practice.

But we also must realise the responsibility that accompanies this authority. As Adam and Eve demonstrated, YAH gives us choices and then holds us accountable for our actions.

Ask YAH to open your eyes to the reality of the authority He has given you. Be ready to apply this authority in your life, and the situations you face.

YAHUAH my ELOHIYM, thank You for the authority You have given me. Give me the boldness to act with this authority. In the name of YAHUSHA our Messiah and Saviour. HALLELUYAH.